I have seriously been putting this one off. I knew this post would be a tough one to write because it w 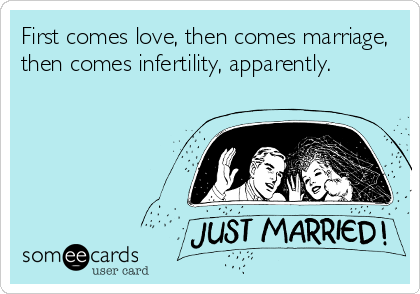 as at this time in our journey that shit got really real.

We were infertile. For real this time. It said so on our chart and everything. It wasn’t just a matter of popping a pill and having sex every other night anymore. That didn’t work. My body treated those pills like they were multi-vitamins. We had to call in the big guns.

We were on to injections now and that was scary stuff.

I remember the first night I had to give myself an injection. I was so sure I was going to fuck it up. I was terrified that I would accidentally give myself too much or too little, or maybe I wouldn’t let enough air out and would accidentally shoot an air bubble into my bloodstream. Can’t that give you a heart attack? My heart was already racing a million miles a minute, I was already certain I was in fact, having a heart attack.

I soldiered on though and I gave myself an injection of hormones every night. Hoping my little follicles were growing with every pinch and every poke. We made the hour drive to my doctor’s office three times a week during treatments. Every Monday, Wednesday, and Friday. For what took a combined 2 hours of driving every day, I would be in the office for max 15-20 mins. My appointments usually lasted 3-5 minutes.

I went in, took my pants and underwear off and hopped up on the examination table. My husband was usually there too and we’d talk or makes jokes, always trying to relieve how incredibly awkward everything was. At least during the first cycle. By the third, we were pros at all of this. By the third, the nurses didn’t even tell me what to do. Instead, we’d give each other a nod of understanding and she’d let me get on with things without instruction.

If any of you have been through follicle monitoring, then you know all about the transvaginal ultrasound. What an experience that is! During cycle monitoring, some women will have one of these done every single day. Luckily, I only had to go 3 times a week. But still, it’s not a very pleasant experience and when your ovaries are ready to pop like two balloons, any kind of pressure or poking is actually quite uncomfortable. The things we do to get pregnant!

It took us two and a half weeks of injections to get one follicle. Just one! My doctor said he likes at least 2-3, ideally 4. But all I could churn out was one little follicle. It only takes one to get pregnant though. That’s what I kept reading online anyway. Only one!

He gave us our prescription for one final needle, an HSG shot, or commonly known in the TTC (trying to conceive) community as the trigger shot. Sounds pretty cool, right? It actually is pretty good. This one little shot will make you ovulate exactly 36 hours after taking it. The doctor instructed me to take mine at 5 am the day before our first IUI. Exactly 36 hours before our appointment.

I remember waking up at 4:40. Again, scared shitless. Still not entirely convinced I wasn’t going to fuck this one up. I sat on the edge of my toilet, my needle prepped, my injection spot selected and wiped clean with an alcohol swab, ready to go.

Why did I get up so early? I was exhausted. I put on a youtube video to pass the time. I waited until 5:00 am on the dot. I didn’t want to mess this up. We’d worked so hard to get here, and this was all very expensive. I wanted this to work so badly.

I took the shot and went back to bed but I don’t think I slept at all.

The next evening, we had our first IUI. We showed up to the doctor’s office at 5 pm and I was initially surprised to see a few other couples already waiting outside of the doors. The regular OBGYN office was closed, and this was definitely an after-hours kinda set up. That’s how you know you’re deep into the world of infertility when your appointments are at weird times or even on the weekends. Because everything is timed ever so precisely, sometimes you have no choice but to get a transvaginal ultrasound the weekend. Some women go to brunch, some women get their vaginas prodded.

We found out a couple of days after Christmas that the IUI hadn’t worked. I was sad. Obviously, I was sad, but I also think a part of me knew it wouldn’t work. I don’t know why, but a part of me was prepared for that no. So, yes, I was sad, but I wasn’t devastated. I think I had already been through so much the year before we had even seen a specialist. I had already mourned the loss I was feeling. And you do mourn a part of yourself. You mourn that naivety that fertile women have. I don’t mean to offend fertile women, but there is definitely a naivety that comes with never having to struggle to conceive.

You had unprotected sex and you get pregnant. What’s so hard about that? And yes, that’s how it works for most women, but many of us aren’t most women. We know how complicated it all really is. We know how everything comes together when things are right and how horribly wrong everything can go when things aren’t right. Fertile women are always surprised when I throw down some random tidbit of reproductive knowledge. How would I know? I don’t have children. How do I know what a mucus plug is? I’ve never had one, but you can bet your ass I’ve checked to see if one is forming during my two-week wait. Hoping that maybe I could feel something and know that something is working down there. Infertile women know this stuff. We’re very avid researchers!

We decided to wait for a cycle and then try another IUI. We had much better results with this one. I only had to inject myself for 10 days (like a normal woman!) and I had two follicles pulling through. Maybe I’d get pregnant with twins! I was so excited and hopeful. We did the IUI and then entered the two-week wait, which is a horrible period in an infertile woman’s life where she googles everything that happens to her, all day, every day.

And you know what? Literally, everything you google during this time will tell you that you are pregnant.

It’s a horrible time when you virtually drive yourself crazy wanting to know if everything worked or not. It’s also a time where your family members or friends will tell you to “just relax”, which is what EVERY fertile woman wants to hear. Cause ya know, she hasn’t already heard that a million times. Thanks for the tip!

As the two weeks came to an end, I suspected I wasn’t pregnant. Sure, I felt pregnant. My boobs were swollen and sore, I was bloated, cramping, tired, sweaty, and nauseous. I had all of the symptoms of being pregnant, just without the actual pregnancy. Fertility meds are cruel like that. They mimic pregnancy symptoms, which makes it even harder to decipher if what your feeling is the beginning of a pregnancy, or if you’re just coming down from all of the hormones.

Turns out. We weren’t pregnant.

We decided to jump right into IUI #3. Why wait? We had had such good results with this last cycle, surely things were getting better. They weren’t. It took me 28 days of injections to get ONE follicle. One!

I knew this one wasn’t going to work. I just knew it. There was no way this poor little follicle was any good. I mean it took 28 days to mature. Surely that couldn’t be good. I was right. It didn’t work. It had taken us months and literally thousands and thousands of dollars to get to this place.

We were tired. We looked liked tired. I look back on pictures of us from that time and we look so worn out. Especially me. Those hormones really do a number on your body.

Our savings was also completely drained and we were ready for a break. Which is what we did. My doctor wanted to put me on birth control for a month or two to give my ovaries a rest. I told him I was going to opt out and take a few months off. Since I didn’t ovulate on my own anyway, my ovaries would be able to rest on their own.

We took this summer off and I started looking into alternative methods. I was primarily dead-set on doing things naturally, but I’ve since decided to meet somewhere in the middle.

I discovered some really great PCOS resources and changed my diet and started incorporating more activity into my weeks. Nothing crazy. Since it was summer, I went for lots of long walks. I cut out gluten, dairy, soy, and refined sugar, and I lost the ten pounds I had gained during our treatments. I also started taking some recommended supplements and within 6 weeks of all of these changes, I got a period. All on my own. No drugs. Nothing. I kept doing what I was doing, and I got another period and then another. I got 3 periods in the span of 7 months. Not bad for a girl who once went a whole year with nothing.

This brings us pretty much to where I am now. I’ve very recently seen my doctor and we’ve decided to try another healthy dose of Clomid. We’re hoping that my ovaries will be much more receptive to Clomid this time around. Since they’ve been working on their own for the past 7 months, maybe all they need is a little bit of help.

We’re optimistic that I will respond much better to treatments now. I just have to keep up my supplements and my diet and hopefully, my body will start to work the way it’s supposed to.

Hi, my name is Jodie. I'm a 30-something teacher who loves writing, reading, watching movies, and hanging out with my husband and our two pugs Rocky & Rosie. x View all posts by Jo